Congratulations with the purchase of the CAP Performance Monitor!

This device will show you in a glance who is causing poor performance at your place or venue, so you can inform them to take measures.
Since in most cases, avatars are the cause of "lag".

The product you received is 'boxed'. Rez the box by dragging it from your inventory onto an empty spot in world.
Left click the box to open it's content and do copy all to inventory. Take care not do this procedure with the actual products, because then you will end up having all scripts inside your inventory and not functioning products.
You will now have a folder in your inventory called: [SHX-CAP - Performance Monitor]

Rez either the board or the 1 prim device by dragging it out of the inventory onto an spot in-world.

There are two items in the box:

A board, 28 prims, as shown below. And a 1 prim device, that uses a floattext. It's up to you what you want to use, but basically they work the same.
The board has as advantage that it can show more data and is easier to read.

Usage is very simple, there are no settings or configurations. You can touch the board or single prim to get a listing of avatars sensed and their script usage.
Note that if you want hosts, managers or anyone else to use it, this will only work for the board. Just set it to a certain group, anyone in this group will be able to touch and see the listing. 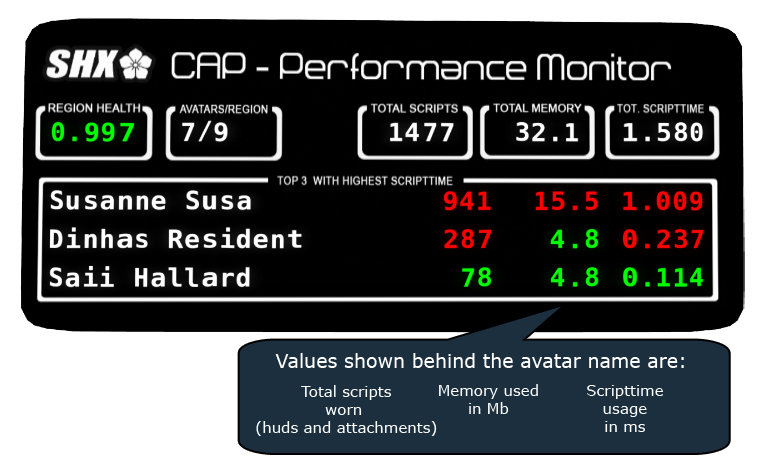 What do i see? And what to do with the information

The region health will drop substantially when for instant avatars zap in that are wearing tons of attachments with scripts, or if you have many physical objects in the region.

It is normal that it will drop below 1.0 temporary, but if you have a constant figure that is in the red zone, try to figure out what is causing it. To do this, make sure that the region is without other avatars than yourself. If it's still below 1.0, search for physical objects. If they are removed, and you have not found the problem yet, contact Linden Lab to come and help. In rare cases, it could be that it's not your region, but another region that is sharing the same simulator. (note the difference between a region and a simulator; A simulator can hold 4 or more regions)

This will show you the avatars sensed by the board, and the number of avatars currently in the region.
The board senses in a 96 meter radius, in a 10 second interval (a faster interval will just attribute to the lag you are trying to prevent)

Unfortunately the maximum avatars that can be sensed at one interval is 16. This rather strange limit LL has imposed on the sensor could be bypassed in an elaborate way by using multiple sensors. But would make the setup far too complex for what we are trying to achieve.

The total scripts, memory and scripttime is the sum of the avatars sensed. This will give you an indication on the performance hit in the region by these avatars.

This will show the top 3 avatars with highest scripttime usage. The image above already shows what information is shown exactly.

Figures will show in green or red, depending on a certain threshold value. The threshold used is of course debatable, but merely a visual indication. It's up to you how to interpret the figures.

Use the information shown tactful, inform the person that is on top of the list in a friendly way. Most people have no clue that they are wearing so many scripts.

And to be honest, i think that we should not have to worry about it, but unfortunately it's just the way it is. The simulators just cannot copy with a lot of scripts. Until LL upgrades their hardware so it can cope running around 1000 scripts per avatar, we, as users, have to be more careful and aware.

In the shown example I had dressed up Susanne Susa with a prim avatar, that has 3 scripts per prim, a well known hud (for spanking etc) that has an idiotic number of scripts and some other huds that use a crazy amount of scripts. All together make up a whooping 941 scripts.

That this has an impact on the region, is without a doubt. Imagine 4 or 5 of these people at your place, and region performance will drastically slow down.

The funny thing is, that people shouting lag!!! are mostly the ones causing it. Unknowingly of course.

So far, the biggest culprit of poor region performance is the very bad implimentation of resizer scripts. Why people use 3 scripts per prim is beyond me.
The solution is very simple, you can use just ONE script for resizing a whole object, prim for prim.

If you are a creator, get this brilliantly written script: tnResizer script from Tatiana Niven or inform your favorite creator to use it. It will be most beneficial to Second Life.

I have the secret wish that people stop using this term. Because there is NO lag in second life. Lag means that you are experiencing latency, but with the current internet connections, it's really a thing of the past when we were still using modems.
There is perhaps server side "lag" at Linden Lab, due to systems that cannot cope with a couple of milliseconds needed to run scripts. But i would call that a poor performing backend. Not lag.

There is also poor performance due to your system not capable of showing so many different textures, particles or just the graphics as a whole. That is certainly not lag. It's just your PC not being up to the task.

Anyway, i've written an article with some tips to prevent lag and some links: Preventing Lag

I hope that by making this board and manual, it will give you some awareness and a tool to get the best out of Second Life.

You can always contact me if you're hitting a wall when troubleshooting lag in your region.

Have fun and enjoy your time in Second Life!,